Thursday I received a Bubblemail from Jo O'Brien asking if I would be interested in being interviewed for a Redbubble Creativity Survey .... 3 questions. I was then to ask those same three questions of two people of my choice, who would in turn ... well you get the idea.

So having answered my questions - I then asked the amazing Danny Nolan if he would be interviewed.

This wonderful interview was the result.

How did you discover Redbubble, and what made you stay?

The same as a lot of people in the early days, via Annelli’s Blog on The Age web site.
It kind of hit a chord. It was easy and not pretentious and just wanted you to contribute what you thought was your best. It was great back then even though it didn’t have a fraction of what we have now. It was very friendly and encouraging and dare I saw it, predominately Aussie.

What made you stay?

Two things.
Firstly, the friendships I had made with the characters on my computer screen, and secondly great moments of inactivity at work. No, I kid.
It would probably be the million ideas and thoughts that invade my head since joining the ‘bubble and the ability to use Redbubble as an outlet to express them.
Sort of like an ideas box (or toilet).

Were you one of those kids at school who did caricatures of the teachers and excelled in Art Class or English? Or did you discover your talent later on in life?

I did do caricatures of teachers for the school magazine two years in a row and if you find an Ashwood High Yearbook 1977 & 1978, you’ll see them.
I was a lazy student and didn’t try hard enough, even though I was constantly told I didn’t live up to my potential, whatever that meant.
I don’t have any regrets. Everything I have and do now is a culmination of what I’ve done in the past and it’s turned out pretty good.

Who on the bubble inspires you – or do you admire?

I’m inspired by lots of things but the people who have really made me feel like there are no boundaries on Red Bubble are also friends.
Scott Robinson has been an inspiration, whether it be supporting my work or asking his advice, even taking my ideas to a whole new level. A great talent and person.
His Wound up tee is brilliant and is worn with pride around our house. Scott’s whole profile is excellent.

The one once known as Lucan has inspired me to do so many different things I don’t even think the same any more. He is one of the only true geniuses I have met.

Some chick called CathieT because she is so enthusiastic it’s contagious.

The writings, ramblings and quick wit of Mr Khan was a find on this site; he also is a very clever man.

TheWarOfTheRoses
doesn’t contribute much but what they have has been nothing short of shockingly brilliant. Stories to make you shake your head in disbelief.

That’s five but there’s heaps more: Ange, Anne Van Alkemade, Empress, the wonderful sjem who is one the nicest people on the planet and the Super Duper Multi Talented (and also nice) Glen Smith and shares his art with the world. I can’t forget the amazing Ronnie Purcell who with all her widgetry and bloggery and podcasting ideas has made me explore whole new areas in story telling.

There are countless pieces of people and art I admire but you’d have to check out my watchlist and favourites.

If there was one artistic talent you could have – and do jawdroppingly well all the time – what would it be?

Your work is incredibly diverse. What gives you inspiration?

Anything and everything.
I can get so excited over an idea and it leads to other things (technical & gadgetry stuff) and then onto learning new skills to make it better. Red Bubble has helped me find out how to scratch that itch, then when that’s exhausted, just when you think that’s all you can do, Bingo – something else comes along.

There is no one specific thing I can mention, it just comes in one big coincidental roller coaster.

I have said heaps of times, I find a lot of story ideas in my pillow and that’s so true. I wake up early and have all these wonderful things bouncing around in my head, some silly, many with a twist, a few of them sad. That’s why I keep a journal next to my bed because I lost as many as I’ve written down.

What would you consider your best piece of work and why?

Hard to say, because everything was done for different reasons, some had a lot of effort and some had none.

I love Binalong Ave because it wrote itself when I was in bed wondering what a world without Mum would be like (morbid & strange I know, but I can’t remember how I got to that thought) and I started to go through a super fast history of the place I grew up in.

It fell into the pillow and I wrote down that morning and posted it on Red Bubble. It has since been published on Australianreader.com. I still get a bit emotional when I read it.

Fear and Loathing at Red Bubble is another all time favourite. After communicating a couple of times with the character Lucan I thought he’d make a great interview (I’d done a couple of profiles by this time) but I knew he wouldn’t be in it, so I made one up in the Gonzo style. It just so happens he was a big Thompson and Steadman fan so he approved.

I eventually met Lucan a couple of times and I now honestly believe the character in the interview could possible be him by the time he is 60. Hahaha.

Epic was fun because it started from nowhere and morphed into this crazy real-time story, something that could only be done on the Bubble. When it was finished and people commented at the end and realised it was a piece of fiction it was very satisfying. It was also the first appearance of the total and utter bastard Ruin.

Pious and Mouse adventures in Rattown was the realisation of a project that was in limbo for years and great to see finished and my latest effort Monk Rock was incredibly fun to make and I would love to see more of this type of story telling on Red Bubble.

What do you dislike about Red Bubble?

Two things: One is the way people criticise RB for not having done this or that. I’ve been here for a year and I still can’t believe I get all this free. Peter, Paul and Martin should be given medals for being so generous.

Second is the mob mentality that happens sometimes and turns into a witch hunt. Very sad when that happens.


What would change about Red Bubble?

When sjem, sonofsjem, the zombieLucan and I broke into the RB offices recently I was shocked not to find an inspiring garret type artist commune but a boring old office. We tried to set fire to it but it everything was so wishy-washy that we couldn’t get anything to burn. If the cash situation improves I’d buy them better offices.

Five things you want to achieve before you die?

Go to Disneyland 5 times…..sorry it’s nothing I really think about, If I had one wish it would be that all my children outlive me.


If you had to restrict yourself to one genre of writing, what would it be?

Is there anything you would never write about?


If it doesn’t interest me I don’t write about it. I’m also loathe to write on technical issues mainly because you have to know you’ve covered every base before printing.

Do you think that formal training or lack thereof makes any difference to a good writer?

Firstly, I don’t consider myself a good writer, I have always said I was lazy and wrote too fast.

Secondly, there are a lot of people who love the English language and how it is written and they demand good writing.

So the answer to your question is No. There is market for anyone who is a good storyteller or has a good story to tell.

It is the reader who makes the final decision.
at 10:24 pm 0 comments

After seeing Pax last week, and being excited by what sort of marvellous promotional tool it was, I then thought - hey, hang on - where's the tshirts?????

Of course the amazing Xavier was one step ahead of us - and late Friday teased with what appeared to be another mosaic compiled entirely of tshirts!! Woot ...

Patiently (sort of) waiting till Monday revealed this: 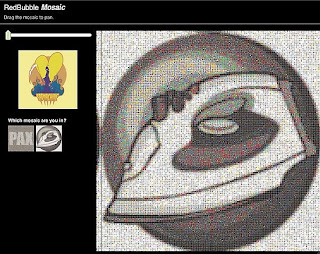 Being a tshirt kind of girl I applauded loudly and then wondered how the hell I was going to (hopefully) find any of my tshirts in this amazing work.

For those of you computerishly inclined, you can download a copy of Ruby, and run a little script thingy doover written by the amazingly multitalented Dave Pearson

Me - I was just really lucky that Dave's nosy and found the 11 shirts I have on there!!

This is a composite image panorama ...

The bride is one image, the moon another and the Manchester Unity building another 3!!
at 3:05 pm 0 comments 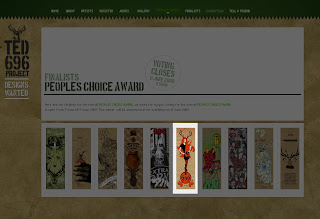 The most amazingly talented Mike Hepburn (aka Big Fat Robot) has made the people's choice finals of the Ted 696 Project.

Go here and then to the people's choice section to vote for her!!
at 12:45 pm 0 comments

I'm gonna have a go ... should be interesting. 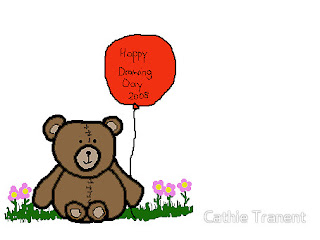 Well, thanks to my lovely Wacom tablet, here he is!! 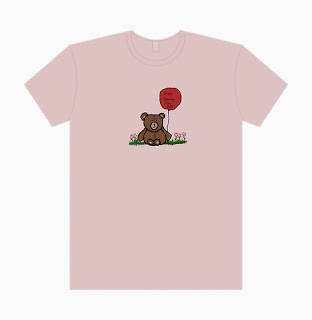 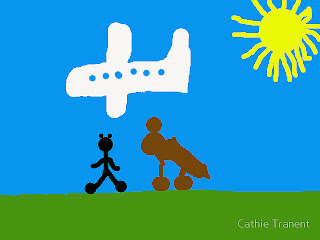 Even Connor had a go!! Entitled Man walking a creature!!
at 3:37 pm 0 comments