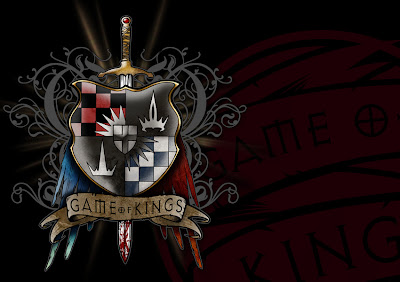 And I'm not talking about chess ... er, well, perhaps I am, but in no form that it's ever been seen before!

To ensure that I explain this properly, I have shamelessly lifted this copy from the official Game of Kings Blog.

The Game of Kings is a collaboration bringing together Red Bubble artists from Australia and the UK. Initially starting out as a series of character-based t-shirts, GoK has expanded to include an accompanying narrative and will be spinning out into other media.

The basic theme of the project is the game of chess. The initial brief was that the project’s creator, Simon Sherry, would illustrate the black side of the board, while a team of eight other artists would tackle the white. As the project gathered momentum and the members of the group shared ideas and artwork, a story began to evolve around the pieces in this celestial battleground. With the addition of Danny to the group as ‘biographer’ of this strange cast of characters, this story took on a life of its own, and everyone involved knew that the scope of the Game had grown beyond the cotton canvas.

Due to the clever skills and imagination of those involved and the epic scope of the theme, the GoK group are creating a wonderful series of artworks, stories and multimedia to hopefully fire the imagination in others. The first ‘phase’ of this project are the character tees making up the board itself. Every two weeks four pieces of the board will be revealed along with a section of the story, adding another piece of the jigsaw to build a final picture. Accompanying the artwork and writing will be interviews with the people involved, adding further insight into the project, their role in it, and the thought behind their creations. Every other week, previews for the next ‘wave’ of characters will be released, along with other behind-the-scenes material to whet appetites for what’s in store. A blog, facebook page and twitter account is also online, providing fans with updates and additional extras that may not appear in the main Red Bubble profile.

The Game of Kings Group on Red Bubble will open its doors in the future to accept members who want to contribute ideas, stories and art as well as compete in competitions that will stretch the boundaries of fun and excitement with prizes worth the effort.

The Game of Kings is more than Tee Shirts. It’s wall art and animated story lines, vignettes and artist clashing styles against each other. It’s books and games. It’s audience participation and contribution. It’s something that we hope you can watch grow and enjoy as a whole new world opens up before your eyes in the next few months and beyond.

Those of you who have been familiar with my work for some time will remember "Live Life Loud", a tshirt I made for my hubby's 40th birthday party costume.

Well, in the interests of equality and indeed as a bit of a personal tribute to the passing of the legendary Les Paul, I have come up with a Gibson version.

I think I actually prefer this to the Fender version ... lol... but isn't that like picking your favourite kid??

After reading's Jordan's blog which was inspired by reading Definatalie's blog, I have decided to have a crack at the interweb's newest mini-meme!

It's easy for most of us to find something to criticise about ourselves - but a list of things you like
about yourself is bound to take a little more work!


So now - tradition decrees that you sail off and write your own list - or if not - add the things you love about you as a comment here.
at 7:47 pm 2 comments

Email ThisBlogThis!Share to TwitterShare to FacebookShare to Pinterest
Labels: cathie tranent, cathiet, hard work but worth it, Jordan Clarke, me myself I, Natalie Perkins

Well, Redbubble and Demo Stores are at it again.

They have launched a third collaborative competition, Music Machines, where again the winners will get to have tshirts hanging in their store in Carnaby Street. Yep - real shirts - on real mannequins in a shop!

After immediately having a couple of ideas, I spent a good week frustratingly trying to translate them from my brain to "paper" .. and finally came up with this! 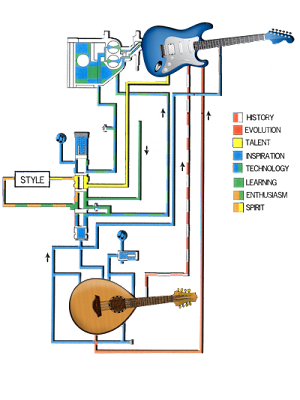 I was surprised tonight to receive an email from the amazingly talented Yanmos with this fabulous mock up of a "real" person wearing my shirt!! Thanks Yannis!

So, there you go .. I can't imagine that this will do as well as my other Demo competition entry, but hey - I've given it my best shot!

As usual ... the pictures are links to buy!

For one week only (expires August 13th) I can offer my friends, family and the world free shipping on all my tshirts and art on Redbubble

The discount code you need at the checkout is CATHIEFFW.