After producing this interview for the RB forums, I decided to add it to my blog!! Not often there's such an interesting read to be had on here!

To kick off this exercise, I picked someone whose work has always tickled my fancy, "samedog"!

It's a very mixed bag for me. At the most basic level I find inspiration around the house and on my walks around Hobart.

A childhood spent on my back on the buffalo grass gazing at clouds taught me to see shapes and pictures in all sorts of things - in shadows, in the lace of curtains, in the lino in the toilet. Throughout my life it has been distraction and pleasure in equal measure.

Then there are the people that come into your life. Some of them have only been there for a moment, some came and stayed, lots of them taught me things even though at times I have been slow to learn. One in particular (Jeff Bogeyman's namesake) taught me the art of not dying wondering. He inspired me to get off my arse and give things a go even though they might not always work out. He probably doesn't even know that he taught me that sometimes the pleasure in life comes from the 'doing' as much as the final result.

Lately that fabulous decade known as the 70's has been driving me. It's been there from the start of Same Dog - the yo-yo that Jake is swinging in the logo is homage to the days when we used to try our luck in the Coca Cola yo-yo comps in Coles New World in Fremantle.

Instead of trickle feeding designs onto the Bub as I have previously, I'm working away at a series of 70's inspired designs that I'm planning on launching to the world as a group. For anyone that wants a dose of design inspiration from the 50s - 70's I urge you to snaggle the RSS feed for grainedit.com

And finally, this intriguing little island underneath 'the Mainland'. I don't claim to be a Tasmanian and don't think I'll ever want to or need to, but being a guest here has delivered inspiration in spades. With the people, the landscape, the creatures here and gone, and a myriad of stories, there's no excuse for not finding fodder for art and design.

How did you discover Redbubble?

I read a newspaper article about Tasmanians selling work on Red Bubble, decided it was just what I needed right at that moment, then promptly forgot about it. Roll on two or three months and I found myself unemployed and determined not to waste my days, and somehow dredged the URL up from the depths of my brain - best dredging I've done in years!

I uploaded greeting cards to start with and sold one on the first day. Someone out there will never know that they bought the first piece of art I ever sold in a commercial setting and sparked a lot of things inside me that have been waiting to be unleashed for years. I look at that card now and can't believe that a) I uploaded it and b) someone forked out money for it, but it sits on my mantle-piece and when I wonder why I bother with all this it serves as a nice reminder.

Is there one medium/style you would like to try that you haven't yet?

I've been trying to teach myself to sew by hand so I can make stuffed versions of my three-legged creatures. I'm here to tell you that learning the blanket stitch via Google is a bitch. Trying to get the old biddies in Spotlight to take a man with questions about needles and thread seriously is worse.

Still, I can see these creatures in my mind and even though I've had offers from capable sewing type people to make them for me, I'm determined to make them myself. Watch this space for soft Tassie Tigers or a T-shirt design inked with the blood of a thousand pricked fingers.

Which is your favourite of your own tshirts?

Hard to choose one of your babies over any of the others, but I'd have to go with "Tiger Bot". It's nothing near anything I thought I'd be putting on a T-Shirt. Indirectly it's the result of a Red Bubble challenge that produced another one of my other robot designs. I woke up at 1am one morning with Tiger Bot in my mind and a cold Hobart sunrise later he'd been born. Not
only do I like the result, but I'm also lucky enough to see it doing the rounds of random Hobart bodies from time to time, which is a huge buzz. The whole Tiger story is a very compelling one down here so the shirt seems to speak to a lot of Taswegians that I run into on the street, which is nice as
well.

In the category of 'Evoking fear in the eyes of a cartoon hamster by the use of two little dots', Gavin King's "A hamster's for life". It's simple and like a lot of Gavin's designs tickles me in ways I don't even understand.

What is your favourite ice cream flavour?

Something people may not know about you?

For various reasons (including a possible dismissal for lying by omission on a resume), this is the first time I've shared this in a public forum - this mild mannered scribbler was a train driver in Perth in the not so distant past. Those who know me know how incongruous that seems, but apart from a
not so good ending it was hands down one of the best 'grown up' jobs I had while trying to prop up my art habit.

Absolutely Pirate even though I'm one of the four people world wide that has never seen Pirates of the Caribbean. I've got a Pirate design on the drawing board at the moment and for any Facebookers out there I can highly recommend changing the language settings to English (Pirate) for a day.


Thanks Samey ... and as well as all the questiony type stuff, I was pleased to discover that the "dog" has a name of his own!!

And for those of you on Twitter ... find samedog woofing - er, tweeting, here!

.... it was safe to come back and that all the hoo haa about Wired from Birth had settled, the aforementioned cotton actually hit the timbers at Demo! 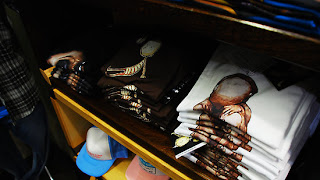 Yeah, I know I came second - but it is my blog you know!!
(L to R Diesel Law's Music Head, Ine Spee's Whistling Boy and you know what!) 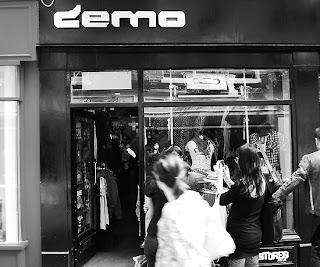 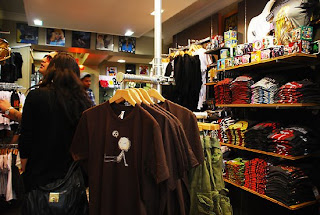 Aforementioned Whistling Boy on hangers (as befits the winner!) 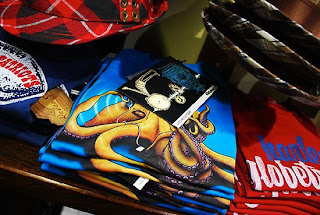 Nick Ford's Hard Roctopus and the massively large taggy goodness with all the details. 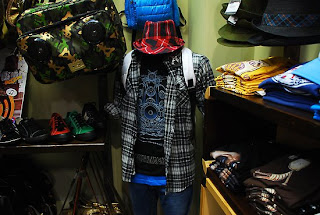 According to the Count of Cotton, Sultan of Stitch and all round tshirt guru onetonshadow, we are all going to hit mannequins just like Scott's AudioHive - Electric!


I would also like to extend massive thanks to onetonshadow for allowing me to hijack his photographs for my blog.

After being inspired by The Guardian Newspaper's April Fools Day joke (they told everyone the paper was closing down and all news would be broadcast via Twitter) I was inspired to create these tees!

Not headlines, but movie quotes.

Followed closely by this:

And while we're there:

And then finally, my personal favourite ..... this:

Stay tuned - I'm sure I haven't flogged the concept to death just yet .... and as usual - click on the blog header to be taken to my website to buy your very own!
at 11:29 pm 3 comments